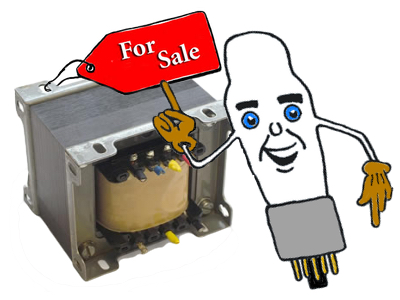 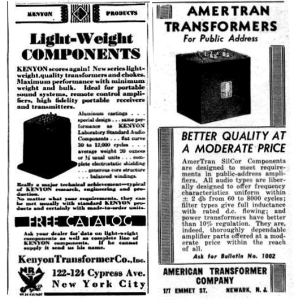 Of course, long before there were guitar amplifiers, there were PA systems, home audio systems, and radio. The original guitar amplifier makers had to use output transformers designed for PA systems until the guitar market was seen as a viable medium, and created its’ own parts industry. Then they could purchase ‘guitar amplifier’ transformers, which were pretty well the same as the PA transformer! The Amertran PA output transformer (above left) has an absolutely perfect frequency response (60Hz-8kHz) for guitar amplification. The Kenyon transformer (above right) has a much wider bandwidth (30Hz-12kHz), and would be marketed towards the home audio market. Both advertisements are from late 1930’s Radio News magazine. No mention is made of the primary impedance, but we can safely assume it was relatively high (probably 10k-ohm plate-to-plate) to reduce distortion. Thus, the Kenyon unit would most likely extend the usable low frequency response by having more iron in the core (more flux density, less core saturation, less low-frequency distortion), and by interleaving the windings extend the high frequency response (less capacitance). This would make the transformer more expensive to manufacture. Since guitar amplifier manufacturers aren’t as concerned about extended bandwidth, they can save money by using the Amertran PA output transformer. In the book The History of Marshall (Michael Doyle), it is admitted that the very first Marshall amplifiers were built with American made 5881’s (before switching over to KT66’s) and ‘off the shelf’ PA output transformers from Radio Spares, one of the many electronic surplus outlets that had proliferated after WWII. In other words, it was a cheap, non-interleaved (GASP!), generic output transformer that changed the sound of Rock ‘n’ Roll! Nothing special. Nothing Designed For The Tone, Baby! 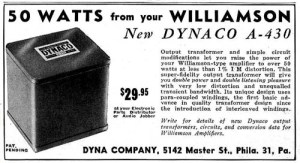 Dyna tried to lure you over to this replacement output transformers with its’ ‘improvements’.

There is more than one way to skin the proverbial cat, and Dyna let you know about it. In a nutshell, ‘interleaving’ involves winding a portion of the primary, then a portion of the secondary, followed by more of the primary, more of the secondary, etc. until your transformer is complete. This is done to reduce the effective winding capacitance, thereby increasing the high-frequency response. It works quite well, but makes the transformer more expensive to manufacture. The method of ‘para-coupling’ involves the process of multiple winding for both the primary and the secondary; these multiple windings are then connected together; some in series, others in parallel. Connecting the windings in series reduces the effective capacitance, but increases winding resistance. By adding another winding in parallel, you increase the capacitance slightly, but reduce the winding resistance. This is just another example of where a careful balancing act is required to achieve the desired goal, and again demonstrates how to end up with a transformer that costs more to manufacture. Below is a schematic showing the general idea. 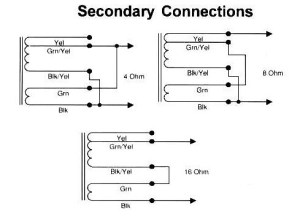 Don’t try this at home with a simple switch, kids.

The above ‘chart’ is included with your ‘new’ transformer, and you’d better not loose it. It is also very difficult to wire this output transformer to a simple switch, and select whatever output impedance you desire. You typically ‘hard-wired’ one secondary impedance, and that was it. In theory, ‘para-coupling’ works quite well if you play a lot of Count Basie 78’s on your Williamson amplifier. That is why these transformers were aimed at the ‘Hi-Fi’ crowd. A guitar player blasting Chuck Berry licks using an MIJ ‘Vintage Reissue’ Telecaster and a Big Muff Pi plugged into a Deluxe Reverb won’t know he has an output transformer, much less if it is or isn’t ‘para-coupled’.

“The manufacturer’s way is seldom the best way, but it is almost always the cheapest way.”

By checking your RCA tube manual, you can see that a simple pair of 6L6’s can be run at many plate/screen voltages and plate-to-plate loads for varying outputs. Early ‘magic numbers’ include 10K-ohms plate-to-plate, then 6600-ohms was considered a ‘better’ compromise between bandwidth, power output, and distortion. Modern output transformers typically use 3800-ohms, and this helps supply up to 60 watts from a single pair of 6L6’s. A very interesting side note; one NOS dealer had a listing for some very old-stock Stancor output transformers (very high quality). The primary impedances are given as 14K-ohm plate-to-plate on many and one is listed at 20K! Can you guess the biggest reason why? I’ll bet you can’t. Test your transformer IQ and email any guesses. Your only hint is that tube type has nothing to do with it. It makes no difference whether you are using 6L6s or 6V6s. Think about it. What the hell, I’ll also mention that bandwidth, distortion, and power output aren’t considered either.

THE ANSWER The primary impedance is up to 20K to utilize the lowest current drain possible; these transformers were designed for battery-operated radios! At such a high impedance, the idle current is extremely low. Batteries, and tubes, would lead long and fruitful lives.

From the book A Desktop Reference Of Hip Vintage Guitar Amps, one of the very few chapters that are worth reading (and is more or less factual) is the Unwinding The Transformer Puzzle offering (pages 111-113). After enlightening us with the knowledge that… ‘Also many vintage amps have transformers that were either wound without enough wattage capacity to handle the amp at full clip (the manufacturers probably never dreamed anyone would ever play the amp wide open) or, at best, the transformers were wound with no margin of safety.’ and the revelation… ‘Some were grossly under-designed. For instance the tweed Deluxe which has a 20 to 22 watt output at full clip and the transformer is a 15 watt design!’ This is all well and true for most early manufacturers, not just Fender. This is why we like the sound! We move on to Ten Easy Mods For Your Pro Reverb, where suggestion #3 baffles me. ‘ADD PUNCH AND DEPTH by changing the output transformer. Pro Reverbs had a smaller output transformer that really left a lot to be desired.’ It is advised to try a transformer that… ‘has much more core material and consequently a richer punchier sound.’  What?

More core material can yield less core saturation (so we’ll lose whatever transformer distortion we had to begin with), as well as extended bass frequency response (which I suppose be construed as ‘depth’). I personally like the sound of the slightly overworked output transformer, and would never advise changing it over to an ‘upgraded’ transformer. Unfortunately, the ‘punch’ part comes from the transformers’ primary impedance, not the size of the core. Please don’t take this paragraph as an indication that I’m smarter than anyone else. The point here is that the book is wrong. Period. It’s OK to have an opinion, just don’t back it up with misinformation. There are other factual tube theory mistakes in the book (not just my opinion, but real theory mistakes), but that’s another story. Oh, by the way; why not pick on the Fender Bandmaster, Tremolux, Vibrolux, or Vibroverb? They all used the very same ‘smaller output transformer that really left a lot to be desired’.

For a little insight into how power transformers work (and making your very own ‘learner’s’ transformer), or an idea for an output transformer ‘impedance meter’, check out CLASSIC ARTICLES. From the page ‘Articles That Didn’t Quite Make The Cut’ I mentioned an article from the April 1974 Radio-Electronics issue entitled ‘All About Transformers’. That article had many pages of simple transformer operation theory that would bore any of us to tears. However, it did have a paragraph about ‘core saturation’ and an accompanying picture that profoundly affected how I looked at output transformers. Below is the aforementioned picture.

If this picture doesn’t paint 1,001 words about output transformers, nothing will.

As soon as I saw this picture, and read the accompanying paragraph, everything became a little clearer for me. Of course old-time manufacturers chose cheaper, light-duty output transformers that simply could not handle the current demands of their amplifier when ‘cranked up’. They simply never dreamed someone would actually play their amplifier on ’10’. But this is the sound we all like today, and why changing output transformers in a vintage amplifier usually changes the tone ‘for the worse’. Finding ‘underdesigned’ output transformers is extremely difficult. Interleaving makes no difference to the saturation level; that depends on the core size and core material, as well as the primary winding wire. It is a constant juggling act trying to find the best compromises when designing an audio output transformer, and these observations only scratch the surface.