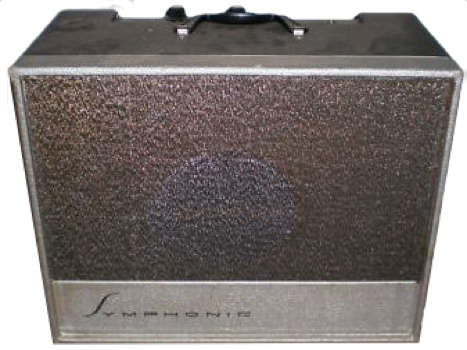 I don’t know much about Symphonic Amplifiers at all. They were made in Montreal, Quebec during the late1960’s, and into the early 1970’s. They were definitely a ‘budget’ line, judging from the handful of different ‘models’ I have seen to date. I have a ‘student’ model which has borrowed the circuit from an AC/DC radio! This means there is no power transformer and an output transformer about the size of a gnat. However, the model shown below is definately the most interesting Symphonic amplifier I have owned/seen to date. Hopefully these pictures will jog someone’s memory. Do you have any advertising or catalog inserts for Symphonic?

Do you know anything more these Canadian made amplifiers?

There are a few things to notice about these amplifiers, after you’ve seen a few of them.

They are always rather low powered. The 2X6V6 example above puts out about 10 watts RMS with 300VDC B+.
As budget conscience as they are, the model above ‘features’ a British made Richard Allen speaker. Who else has heard of Richard Allen? I certainly hadn’t, until I came across this amplifier, and then paid attention when I came across Richard Allen speaker advertising in the Canadian magazine Electron. The advertisements all mention Hi-Fi Stereo speakers, and if I didn’t have this amplifier, I would have ignored the ads entirely. The speakers were distributed in Canada by the William Cohen Corporation, of Montreal. It makes sense to me, now. You always buy locally first. Below are a few Richard Allen advertisements I managed to uncover.

Regarding the speaker, note the RCA jack on the chassis. There is a second RCA jack on the opposite side of the chassis, just on the other side of the output transformer. Each jack is wired to a tap on the output transformer. The 8-ohm (shown) is at the ‘outside’ edge of the chassis, whilst the 4-ohm tap (hidden from view) is on the opposite edge of the chassis. To me this adds the cost of one RCA jack and the labor of wiring it up, as well as having the speaker ‘cord’ (a shielded RCA jack, no less) hanging in front of the controls. Why? I suppose I could ‘clean up’ this connection, and shorten the RCA cord by about 15 feet, but this is how I got the amplifier, and this is just how I photographed it for you to see. Check out the Richard Allan speaker below.

Interesting that a little Canadian amplifier maker would use ‘imported’ British speakers.

They typically use the standard guitar amplifier tubes; 5Y3, 12AX7, 6V6, etc. However, this amplifier uses a 6AV6 for the Tremolo. It is the only Symphonic amplifier I have seen (although I haven’t seen many) to have Tremolo.