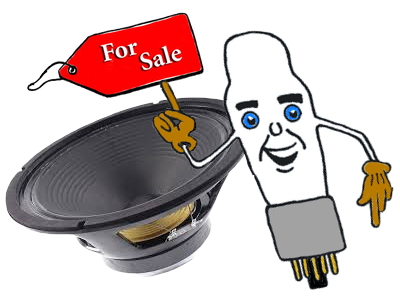 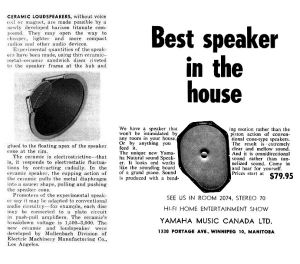 The following is an excerpt from the excellent book Audio Design Handbook (H.A. Hartley), published in 1958. The chapter on speaker design discusses cone material thusly; “…Paper is used because it is cheap, easy to work, and lends itself to mass production. It appears to have no other advantages that can be determined by laboratory investigation. Other materials, such as metal and bakelite, have been used from time to time, with varying degrees of success.” Another company, Mullenbach (above left) developed a speaker that went one step further and had neither magnet nor voice coil of any type! What ever became of this design? I wish I knew. Another off-the-wall speaker ‘design’ is the Yamaha ‘Natural’ (above right). Avoiding the piston-like action of conventional speakers, this speaker promised clear, omnidirectional sound. Yamaha made another unusual speaker, a trapezoidal plastic cone affair that was used by Fender in the Bantam Bass amplifier (see below). The amplifier was manufactured for only two or three years and quietly discontinued. My favorite unusual ‘speaker’ has to be the use of a gas flame as the ‘speaker’! It seems that the ‘hotter’ the flame, the greater and clearer the audio output! Mullenbach’s speaker is evidence that the audio industry was looking for a more streamlined approach to the bulk and expense of the ‘current’ speaker manufacturing methods. The first speakers used in radio and audio amplifiers were the bulky field-coil type, which were replaced by the permanent magnet type during the Depression/WWII years. Not much has changed since then, save for the ‘new’ idea of the aluminum cones found in some bass speakers (e.g. Hartke). 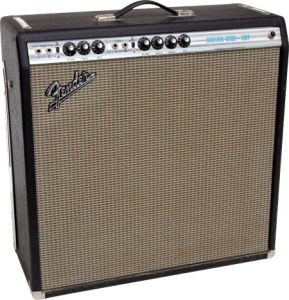 From the front (and from a distance), a Bantam Bass can be mistaken for a Bassman 10 or even a Super Reverb. 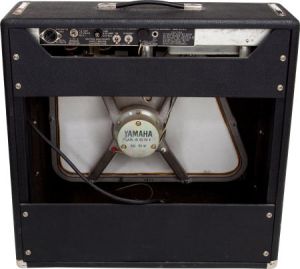 Fender Bantam Bass was a very stripped down Bassman circuit with a very unusual Yamaha speaker.

The 1966 Radio Electronics advertisement for Oxford speakers (above) is an example of the advertising aimed very specifically at the guitar amplifier industry, when it was plain to see that a dollar or two could be made from them. It is also thankfully full of lies. Of course we don’t expect (or even want) ‘…faithful reproduction (at) …conditions of severe overload.’ We would much prefer the distortion of the (thinner) cone material adding all sorts of wonderful overtones to the original waveform signals. It would take a while longer for manufacturers to catch on that guitar players liked ‘distortion’. Barely a decade earlier Oxford didn’t even bother thinking about guitar amplifiers, as you should be able to deduce from the earlier advertisement campaign (below). 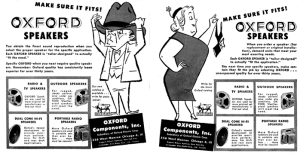 This is a sample of the late 1950’s Oxford advertising campaign claiming their speakers are ‘Tailored Designed’ for very ‘Specific Applications’ and include radio, outdoor PA, Hi-Fi, and guitar amplifiers….. um….. wait just a minute, they’re in there somewhere….. Well, they’ll make ’em sooner or later, I’m sure. The point I’m trying to make here is that you couldn’t pick the best… for the tone. You picked your parts from what was available to you at the time. That should be obvious, but some tube ‘gurus’ still don’t get the joke.

Here is an old catalog insert for a pair of Celestion speakers available during the early 1960’s. The catalog insert strangely gives more technical specifications than I have ever seen in any other catalog. Note also that the 10″ speaker has a stronger magnet (more flux density) than the 12″ speaker. Now if I never give you another hint into vintage tone ‘secrets‘, you should thank me for this one.