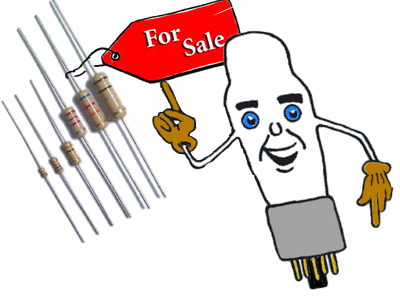 Early resistors were not noted for being precision units. ‘Cracked carbon’ types were also notorious for being noisy and derating from thermal problems and age. CentraLab and Lynch advertised their resistors as being simply better built units, with benefits that the ‘modern’ electronics technician needed most to keep his circuits operating. (Both ads are from late 1930’s Radio News magazine.) Another benefit often advertised was a ‘special’ insulating coating, to eliminate the possibility of shorts to the chassis or adjacent wiring. The next wave of resistor technology came in the form of carbon ‘composition’ types, made by combining a mixture of carbon, insulating filler, and a resin binder. The ratio of carbon to insulating filler determines the resistance value. These inexpensive ‘generic’ resistors became the buzzword for wannabe tube amplifier gurus, insisting that they be used for vintage tone. Unfortunately, carbon composition resistors almost always become thermal, especially as the plate load in your vintage Fender amplifier. Here they achieve a sound all of their own, akin to bacon frying on the stove.

“Ask any old-time TV repairman if using a carbon composition resistor in the burst amplifier or the chroma circuit will give him a ‘better’ picture.”

This Lynch advertisement went as far as letting you ‘examine’ one of their resistors under a microscope (upper left) and compare its’ uniform carbon coating to other poorer quality resistors (lower middle and lower right). The ad states….. ‘the uniformity… gives greater current-carrying capacity-freedom from heat… noise… change!’. The ‘Brand X’ resistors pictured beneath the Lynch photo have a ‘rough surface which causes excessive heating;-gradual change in resistance.’ This ‘change in resistance’ is the culprit behind thermal noises in your vintage Fender, and is the reason why old-stock carbon composition resistors may not be a great idea for that boutique tube amplifier you build today.

Mallory advertised their film resistors as being extremely stable.

The next wave of resistor technology came about as ‘carbon’ was replaced as the resistance material, or the manufacturing process was ‘improved’. In these resistors, carbon is replaced by either nickel chromium (‘metal film’), a mixture of similar metals and glass (‘metal glaze’), or a mixture of similar metals and an insulating oxide (‘metal oxide’). In ‘film’ resistors, the resistive material is deposited evenly over a ceramic rod. The desired resistance is obtained by removing part of the resistive material in a helical pattern along the rod. Very close tolerance can be obtained with this method. Mallory ‘film’ resistors were advertised as being extremely stable, even over the course of their useful ‘life’. The chart shown above tests the stated resistance value over the time period of 10,000 hours of having them used in real world circuits. The resistance value deviated only -0% to +1%. There would be no added thermal noises. How do you think this would affect your sound? Some people need the sound of bacon frying to cover up the sound of their guitar playing, and for them God invented NOS carbon-composition resistors.

Is this the magic ingredient for great tube amplifier tone? Not at all.

Here is a neat-o experiment I’ve been doing recently, and one you can replicate in the privacy of your own laboratory! I do it to show curious guitar players why carbon-composition resistors aren’t necessarily worth the hoopla. 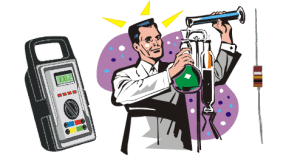 With only a handful of items you too can do this neat-o experiment!

You will need the following items;

Some carbon resistors were packaged with a little silicone bead ‘baggie’ and they tended to ‘keep’ a little better.

First, you will hook up one carbon-composition resistor to your VOM. Use clip leads, and put them at the ‘end’ of the resistor leads, away from the ‘body’. Next, you will watch the value of the resistor as you apply direct heat to the resistor. Try to apply the heat on the ‘body’ of the resistor, and avoid your clip leads. You may ‘toast’ a resistor or two if you apply too much heat for too long a period, but it’s in the name of science. You should see the results in a manner of seconds if you are quick and thorough in applying the heat to the resistor body. This heat is somewhat similar to the operating temperatures inside your amplifier. Also, current through a resistor will generate heat. I recall the first Mesa Boogie amplifiers I worked on (Mk I’s, Mk II’s). Certain power resistors inside the chassis got smoldering hot to the touch. Doubling up on the wattage rating made absolutely no difference to the blisters on my fingers. Try a few different resistance values/wattage ratings yourself and chart your ‘discoveries’. You can also try the ‘Freeze-Spray’ once the resistor ‘body’ has returned to room temperature.

What, if any, conclusions can you derive from this experiment?

Do you think the results would be similar for capacitors?