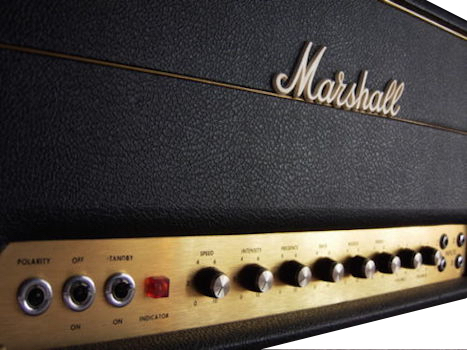 How to Bias a Marshall JCM800

Biasing any Marshall has many pitfalls, and it will be a daunting task to try and demonstrate the ‘proper’ way to set up your Marshall (or any other amplifier equipped with EL34’s). In a nutshell, here are a few things to watch out for.

There are many bias ‘calculators’ available ‘on line’ for you to investigate. For the curious, or for those that wish to compare the parameters selected for the different calculators, you may visit the following alternatives.

If anyone knows of any other similar web sources, a ‘heads up’ my way would be most appreciated. Now, for those that insist on measuring plate current (or what you believe to be plate current), please consider the following warning.

WARNING! For those of you who insist on measuring plate current, be advised of the following. Measuring by way of the ‘transformer shunt method’, the indicated plate current (or what is purported to be the plate current) will be lower than if you insert an ammeter in series with the plate connection, or use a 1-ohm resistor in the cathode of the output tubes. In one experimental setup, the transformer-shunt method indicated 33mA of idle plate current. Inserting an ammeter in series with the plate lead yielded a reading of 36mA. Measuring the voltage drop across a 1-ohm resistor in the cathode gave a reading of 31.5mVDC, translating to a current of 31.5mA through that particular tube. Carefully measuring the resistance value of the purported 1-ohm resistor, I ‘discovered’ the value was slightly higher than 1-ohm. Hopefully, you see the pitfalls with this method which is highly touted as being the only ‘accurate’ method.

The first set-up I chose was a complete set of new ‘Groove Tubes’. The phase inverter tube chosen showed a close matching between halves, and the power tubes (EL34S, and a performance rating of ’10’) were tested to see that their transconductance matched within 5%. The power tubes appear to be from Svetlana. Many ‘gurus’ will not even own a tube tester, much less an oscilloscope, so this exercise is going far and above the ‘normal’ practice. Besides, with ‘Groove Tubes’, they should already be matched, right? Using a B&K E310B signal generator, and an 8-ohm 450-watt dummy load, the bias is set high (-44.2VDC), and the amplifier is hooked back up to our Leader LBO-508A oscilloscope. I do advise that a 20MHz bandwidth is about my minimum ‘standard’. The trace usually appears to be sharper, clearer, and helps bias up the amplifier ‘better’. Check out the photo below.

Even with the bias control set at maximum value, this JCM800 head does not look too terrible.

What you may notice is that the waveform isn’t too terrible ‘as is’. The measured idle plate current was 20mA with a bias voltage of -44VDC. Now, adjusting the controls to achieve a clean sine wave is a chore in itself, and setting the bias only complicates matters. Here, I reduced the bias carefully, until the waveform below was seen.

JCM800 head appears to have the bias adjusted ‘properly’.

The above waveform was obtained by lowering the bias voltage to -41.4VDC. The measured plate current was 31mA for one tube, and 33mA for the other tube. So much for premium ‘matched’ tubes. The measured plate voltage was 456VDC. A visit to the Weber Bias Calculator and the Tube Amp Bias Calculator both suggested a bias measurement of 38.3mA, so I believe I had hit this sucker as close as I’d care to. Rather than the ‘guru approved’ 70% target, I will just have to learn to live with these tubes biased at only 61% of maximum plate dissipation. I mentioned a few tips on what you can check to confirm you did not purchase ‘flaky’ tubes, and to be sure they are biased ‘properly’, and here is the list. It is guaranteed to be neither complete nor authoritative. This is just what I do with certain EL34 amplifiers.

I mentioned earlier that you do need to be careful in setting the amplifier controls when attempting to bias any Marshall. Below is a photograph of the same JCM800, but now the controls are set just a little too high for our purposes.

JCM800 with controls set ‘too high’ show clipping and cross-over.

What you should note is that the pesky cross-over notch has actually returned. The square wave also shows ’tilt’, which in this instance is an indication of a sharper leading edge. A square wave is made up of a fundamental plus an infinite number of odd-order harmonics. This makes for an excellent ‘detective’ when you want to know about an amplifier’s frequency response. However, keep in mind that an amplifier without negative feedback cannot deliver a true square wave at any frequency, and the time constant of the feedback circuit will affect the results1. The waveform above could have low-frequency attenuation, or it could have a feedback circuit with a long time constant. However, this was using a clean sine wave input, so the technician should know better, and set his amplifier controls in an effort to avoid the waveform seen above. Below is the same signal generator, plugged into the same JM800, and now set for as clean a square wave as I could muster.

Square wave through a JCM800 shows inadequacies of ‘stock’ circuit.

What you should ‘see’ is the lack of a cross-over notch. The frequency response of the amplifier isn’t very ‘flat’, or the output transformer is possibly at fault. Therefore, it isn’t prudent to discuss what is happening in this circuit, since I did not take the time to investigate specifically what was causing the poor square wave response. Besides, we are simply interested in ‘learning’ how using an oscilloscope biases any tube amplifier so cold that the average guru can see his breath standing next to the amplifier. For the curious; the above waveform would indicate poor low-frequency response, and there would be no ‘phase shift’ at this particular test frequency. However, as I have mentioned before, the output transformer could be at fault just as easily as the circuit design.

Even blondes do not have any fun when they worry too much about the bias in their amplifier.

Now I would like to take another ‘step up’ in my oscilloscope choice, and see what I can learn about my JCM800. Next is an Elenco S-1345. This is a 40MHz oscilloscope, and from the photograph below, you should note that even the crossover notch appears sharper and clearer. I will keep the same set of Groove Tubes, and look at the waveform with the bias voltage returned to -44.2VDC.

Carefully jockeying the controls and the bias voltage, I achieve the following waveform.

40MHZ oscilloscope shows the removal of the crossover notch quite nicely.

The measured plate voltage is 456VDC, and the measured plate currents are 33.8mA and 35mA with -37.8VDC worth of bias. We have pretty well ‘nailed it’, so I feel pretty good about this oscilloscope. I decide to test play the amplifier before I think I am ready to try a different set of EL34’s.

The obvious problem is when has (the crossover notch) ‘just disappeared’? Most folks do just a bit more than ‘just disappeared’ and get their (output tubes) too hot causing shortened tube life and overheating. Not very accurate or repeatable.

Substituting ‘everything’, I select an 80MHz Sencore SC3080 oscilloscope. Next, the Groove Tubes are swapped out for a set of JJ EL34’s, I return the bias voltage to -44.2VDC. Just to keep things really interesting, I also switch to a 4-ohm dummy load. Hooking up the 1KHz test signal, I achieve the following waveform.

Sencore SC3080 is a really nice oscilloscope that will do a few extra tricks.

The Sencore SC3080 is a really nice oscilloscope with a few extra tricks up its sleeve. You can select a digital readout to display the frequency, peak-to-peak voltage, or the DC voltage measurement. Since the peak-to-peak voltage is of more interest to me, I chose that option. By using math (ugh!), we can say 37 volts peak-to-peak is approximately 12.95 volts RMS. Taking the next step, 12.95 X 12.95 / 4 = 41.76. This is to say this Marshall is achieving 41.76 watts, even biased pretty ‘cold’. This is all perhaps ‘useless information’, but I’d thought I’d throw it in there, just in case anyone cares. Carefully adjusting the bias voltage, the following waveform is seen.

The measured plate voltage is 455VDC, and the plate current is 35mA and 36mA, or about 64% of maximum idle plate dissipation. Playing the amplifier at clean settings (and who does that with a Marshall?), the bottom-end seems as full and as tight as any Marshall I have heard, so I can safely assume this procedure went smoothly. Measuring the Screen Grid voltages and Control Grid voltages did not hint at future melt-downs, so for now we can close the book on this JCM800. I will do some ‘tweaking’ to the circuit, and those modifications can be seen at The Ultimate JCM800?

What, if anything, can be concluded from all of this? I have a few points to make, and you may come away from this ‘Lesson’ with a few of your own observations. This is all perfectly acceptable, and hopefully this will lead you toward doing your own experimenting.

The whole point of this exercise was to show you that using an oscilloscope to bias your amplifier is not as bad as many gurus will have you believe. However, there are pitfalls that have to be addressed. Back at Articles That Didn’t Quite Make The Cut, you were given a hint that any oscilloscope can lead you astray. Make sure the oscilloscope you use is in good operating condition, and use the appropriate probes. The same carries over to your signal generator. Misunderstanding or misusing these techniques can also result in a very disappointing experience.

One thought on “Marshall Bias”