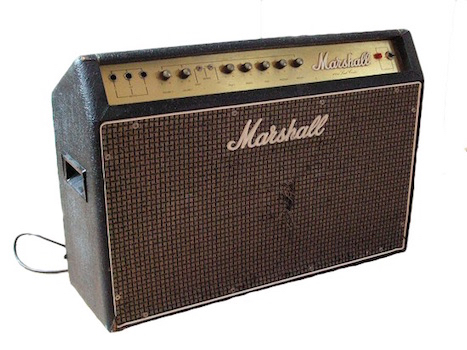 Marshall guitar amplifiers have attained a cult following, and their own set of inbred myths and legends, that needs only their one name to identify them. If I told you I owned a vintage Fender amplifier, your first question might be… ‘Which model?’ or ‘Is it brown or black faced?’ When I tell you that I own a vintage Marshall, that is all I need to say. You just know that it is a 50-watt, 4-input, non-master volume model 1987 (only a select few can handle the awesome power of the 100-watt model 1959), even though the earliest Marshall ‘catalogs’ contained combos and up to a 200-watt head. Other buzzwords can include ‘plexi-panel’ and whether it has a ‘small logo’ and a ‘removable impedance selector’. Another catch-phrase is whether or not your Marshall has the ‘lay-down mains transformer’, which is a misnomer. This is not a style of transformer that any manufacturer understands, but the vintage dealers do. These and other myths and legends all came about because guitarists abhor changes to their gear (‘They don’t make ’em like they used to!’) compounded with the fact that Marshall hasn’t made a good amplifier since the JCM800.

The first thing that needs to be realized is the ‘classic’ Marshall amplifier is a damn close replica of the 1959 tweed-covered Fender Bassman, or the model 5F6-A. (You can read all about this in the History of Marshall book; see the end of this ‘Lesson’.) What makes the Marshall ‘version’ of the Bassman circuit sound like night-and-day in comparison? A combination of a few deviations.

There are other Marshall ‘quirks’. Have you ever thought about the 16-ohm speaker impedance? This is really a Celestion quirk, but one story I heard is that the British engineers had a problem with the losses in the PA systems of the day. People were using cheaper light gauge wire for the speaker leads. These thin wires, when ran over a considerable distance, offered resistance. You now have a voltage divider between the wires and the speakers. Since engineers couldn’t convince people to use proper speaker wire, they adopted the use of 16-ohm speakers. How does this help? Assuming a rather high 1-ohm resistance in a very long speaker wire, in series with a 4-ohm speaker load. You now have a 20% loss of power output in the wire (1-ohm is 20% of the total resistance of 5-ohms). With an 8-ohm speaker the loss was reduced to about 11%. With a 16-ohm speaker, the loss was down to under 6%! (Of course I will get plenty of Email stating that the speaker impedance is NOT constant, or even a DC measurement. These are just mathematical numbers for the sake of argument; the same as probably used by the engineers.) We don’t use long speaker leads in our guitar amplifiers today, but the thinking has stuck with the engineers. Other quirks and myths surrounding Marshall amplifiers include:

The ‘Pentode-Triode’ switch, while not named correctly, is still very useful in high-powered amplifiers. 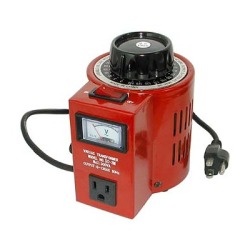 If you think you ‘need’ one of these, lay down until the thought goes away.

I would like you to study the diagram below carefully. It is from the book Audio Cyclopedia, by Howard M. Tremaine. It deals with the prospect of running the filament voltage on any tube at other than 100% rated value. The illustration shows that tubes will fail prematurely if the filament voltage is either higher or lower. For maximum tube life, the voltage must be ‘right’.

Mr. Tremaine thought about this shit years before the VariacTM was ‘invented’.

From the chart above, you should be able to determine that if a tube has a usable life of approximately 6,000 hours with its filament operated at 100% of the rated voltage, the tube’s life expectancy is reduced to 1,000 hours just by lowering the filament voltage by 10%. This translates to a 6.3VAC tube being run at approximately 5.67VAC, or the input voltage lowered from 120VAC to approximately 108VAC. Ask your local tube guru if they have read Audio Cyclopedia. However, even ‘experts’ can disagree on anything and everything. GE published data confirming tube life is decreased substantially by raising the filament voltage, although tube life can be increased by lowering the filament voltage very slightly. The performance of the tube was purported to be more ‘even’ over its useful life. However, it should be pointed out that the slightly lowered filament voltage GE ‘recommends’ proportioned to the plate voltage (via your VariacTM) won’t make a difference to our ears. People who set their VariacTM to 100VAC are only asking to replace tubes every other month. The GE report also stated that the transconductance of the tube was reduced dramatically, and an audible deterioration in performance was noted when reduced filament voltages were employed. So why bother?

If the filament is operated at higher voltages, some of the cathode coating material is evaporated and permanently lost. 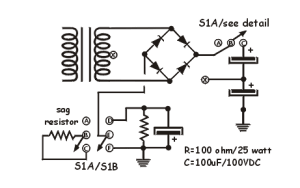 ‘Grandma’s’ Chocolate Cake recipe isn’t much different from my wife’s!

If the filament is operated for long periods at reduced voltages, the effect is a reduction in emission.

An excellent idea to promote longer tube life in your Marshall (especially with the poor quality EL34’s available today) is to utilize a few ‘tricks’ seen in collectively in Hiwatt, Traynor, and Garnet amplifiers. Below is a pictorial drawing of the stock output tube socket wiring scheme, simplified and drawn as well as I can. You should be able to make out ‘heads or tails’ though. The ‘grid stopper’ resistor is usually standing up vertically right behind the Screen-Grid resistor on a Marshall, and the 1500-ohm grid-stopper will be laying down across the tube socket on a Fender amplifier. On every Marshall the Suppressor-Grid is tied to the Cathode and then wired to ground.

The standard values are 1K/5W for the Screen-Grid resistor and 5.6K for the ‘grid stopper’, although that value can vary slightly. Most technicians will automatically think they are doing you a favor if they raise the value of the Screen-Grid resistor to help Marshalls that ‘eat’ output tubes, with some mail-order mod ‘kits’ raising the value to 2K or even considerably higher. While that does work quite well, you can certainly do better, as seen below.

The above wiring scheme has quite a few benefits, but please be 100% sure you know what you are doing (if not, refer to a Traynor YBA-3 schematic). To give the appearance of factory wiring, I drill two small holes on the circuit board and use similar looking wire. The above circuit will reduce secondary emission of the tube even better than the original wiring scheme. You also get improved linearity. This will end up making the tube’s plate current more efficient to the point that you will have to rebias! The last Marshall I ‘modified’ in this manner had the plate current increase 5mA. So, please recheck your bias after doing this procedure. Where some technicians insert a 1-ohm resistor between pin #8 (cathode) and ground, this arrangement is far ‘safer’ for the tube. Think about it. Instead of having the Suppressor Grid at ground potential or even at a negative voltage, you would have a positive voltage (granted only 50mVDC or so, but positive nonetheless) on that grid, because no one ever separates the Suppressor Grid from the Cathode. Where most inexperienced technicians have trouble with EL34’s is in a ‘poorly’ designed amplifier that was biased by the current draw method via a 1-ohm resistor in the cathode! The idea presented above, in concert with an ‘improved’ Screen-Grid wiring scheme, yields a very efficient environment for any EL34. That wiring scheme is seen ahead in ‘Mods and Odds’, but I’ll give you a sneak preview. Remember that those 100-ohm resistors seen below are the Screen-Grid resistors soldered on the tube socket. 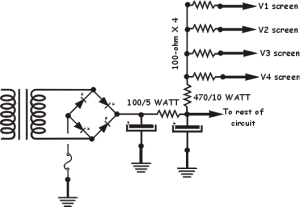 This setup is seen in 100-watt Hiwatt amplifiers and Traynor Custom Special amplifiers. Of course the 100-ohm/5-watt resistor in the power supply takes the place of the choke seen in Fender and Marshall amplifiers. Keep in mind Hiwatt ‘got away’ with using 1/2 watt resistors for their Screen-Grid resistors seen above, and the failure rate is surprisingly low. Well, surprising to most ‘gurus’ it would appear. A final tip in weeding out bad EL34’s is to bias up the amplifier and then measure and compare Screen-Grid voltages. If you have a 100-watt Marshall and the voltages you measure are (A)520VDC, (B)518VDC, (C)521VDC, and (D)493VDC, the last EL34 (tube ‘D’) is ‘bad’. It is drawing excessive screen current, and that tube should be thrown in the garbage. A volt or three of difference is nothing to worry about; you are looking for the tube with a considerably lower Screen Grid voltage.

Recommended reading for this lesson is ‘The History of Marshall’. To read my own personal ‘review’ of this book, look here. If you ever get the chance to have a tweed Bassman and a Marshall 50-watt head (Model 1987) near your bench at the same time, make some comparative studies. Measure voltages and scope the output. If you own a Marshall, place a 200 to 250-ohm/25-watt resistor across the output jack (this can be mounted on the chassis). Or at least change the jack to a shorting-type (similar to the input jacks). If you decide to implement the ideas for the Screen Grid and suppressor grid supplies, please give me a ‘report’ on how the ideas worked for you and if you noticed any changes in tone, along with how your tubes are ‘holding up’.

Try a few mod ideas, in a ‘Lesson’ I humbly refer to as THE ULTIMATE JCM800?, and stop using fuzz boxes, attenuators, and never add 12AX7’s to your Marshall again! After you’ve purchased a ‘new’ set of output tubes for your JCM800, learn how I would bias them up by here.