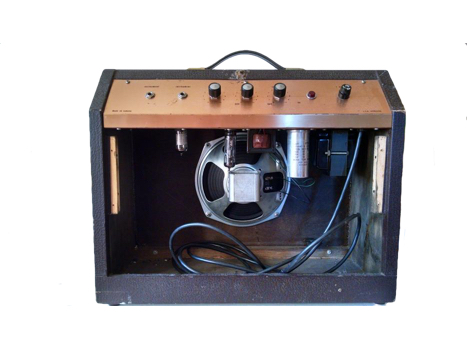 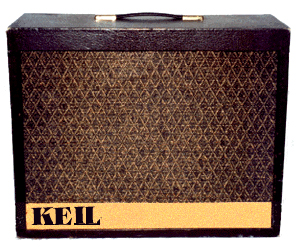 The only Keil amplifier I have ever seen.

I know nothing at all about this amplifier. The only information I could dig up on Keil Amplifiers was that the name was an acronym for Kitchener Electronics Industries Limited. Clever. Maybe someone from Eastern Canada can shed a little light on this company. Who was the man behind Keil? Were they a ‘stencil’ amplifier line? An interesting ‘feature’ on this particular model was the inclusion of a ‘courtesy plug’ actually labeling its intended use for a phonograph motor! There was also an accompanying input jack designated ‘PHONO INPUT’. Presumably the input would be ‘designed’ to work with the output of a ceramic or a crystal cartridge. See the photo below.

The amplifier is a fairly well made affair, with a Marsland speaker typical of the era. The transformers are from a company called Frost, who were the small market alternative to Hammond. This amplifier has 2X6V6s putting out about 20 watts into the single 12″ speaker. The sparse tone controls are only offset by the Tremolo function.