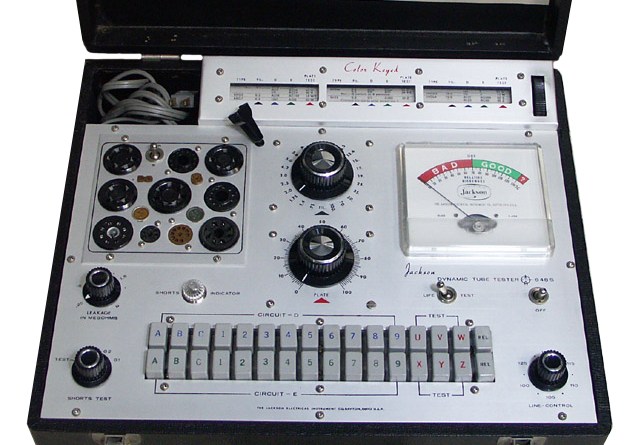 The price for these testers on eBay has come down quite a bit.

There are many examples of the ‘648’ family to be found today, as it seems Jackson manufactured this tester (in some form) for at least thirty years! 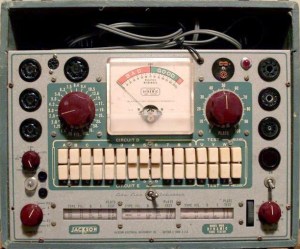 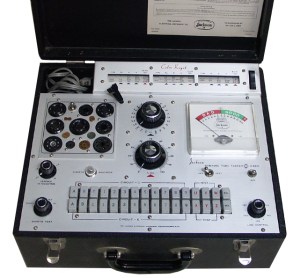 All Jackson Testers are emission testers ‘in a round-about way’, although the patented Jackson ‘Dynamic’ circuit is employed. I have a sneaking suspicion that this may make for a much better mousetrap, but the general consensus is that it does not. What I do understand is that the first advertisement seen above is from the July 1969 issue of Electron magazine. And, keep in mind the above price is the ‘Dealer Net’. I am very afraid to even imagine what the retail price might be. You may also notice the metal cabinet 648 (upper left photo) does not appear to have a lid. I have seen a few of these very old ‘plain’ Jackson 648 tube testers, and they do not seem to have ever been equipped with a lid. This makes me think they were counter models, or meant for the front counter of the radio repair shop, to show customers the condition of their tubes. My Jackson 648A (upper middle) is dated ‘1948’ inside the wooden cabinet. The later examples, such as the 648S above right, seem to be from the mid to late 1960’s; I haven’t had a 1950’s example to note the exact model designation, or when they appear to have occurred. Below are a pair of advertisements found in many 1960’s issues of magazines such as Radio-Electronics.

What you should note is that starting with the 648R, you could substitute the factory socket assembly for a reversible version! This let you ‘flip over’ the socket assembly, where the older tubes (4-pin, 5-pin, and the like) could be tested. The ‘modern’ tubes were tested on the reverse. Each side consisted of seven sockets, meaning you could test a total of fourteen different tube types. This made the 648R/648S a very versatile tester. I have heard that you could use this ‘adaptor’ with the 648-1 as well, but I have no first hand knowledge of this. The advertisement above left is from the November, 1964 issue of PF Reporter, and curiously enough does not show the reversible adaptor. Instead, all fourteen are crowded onto the one socket assembly. Do note that the advertisement claims the ‘648’ is sixteen years old, making my 1948 dated version indeed the earliest possible example. Finally, below is an advertisement pulled from the December, 1965 issue of PF Reporter.

Jackson 648-1 advertisement is short on hype, long on ‘facts’.

What is refreshing about this advertisement is that it is very short on ‘hype’. There is no need to boast that the 648-1 as the ‘latest and greatest’ tube tester ever produced by one of the most respected names in test equipment. Instead, we are told the tube socket layout is designed to simplify changing, thereby practically eliminating obsolescence. Mention is made of the color-keyed panel, and the push-buttons being ‘faster’ to set up than rotary switches. It’s hard to argue those points.

One interesting piece of trivia is the ‘fact’ that there is an honest-to-God tube inside your older Jackson 648 tube tester! Very few people know about it, and it is a good idea to replace it. I still haven’t figured out exactly what it does, but my suspicion is it is used as an amplifier for the test signal. Why you would want to do this is a mystery; why not take a higher filament tap as your test signal? Perhaps to avoid loading down the test voltages, as the amplifier effectively isolates it from the other windings, and raises the impedance of the test signal. Anyway, below is a photograph of the interior to my 648A.

Interior of Jackson 648A reveals one teeny tiny tube.

A last little piece of trivia is the ‘fact’ that every old-time radio man I spoke with about Jackson tube testers commented that Jackson had a reputation of not having very accurate readings, with a very ‘wide spread’ of readings when comparing a handful of similar tubes on a Jackson and then a Hickok (as one example). Whether or not this is just a repeated urban legend is a mystery. This could be confirmed by comparing readings between, say a Jackson 648, an Eico 666, a B&K 707, and a Hickok 533. This would of course assume the each tube tester was calibrated ‘properly’. All of the Jackson tube testers I have seen or own/owned still seemed like they were built pretty well. I really like the fact that on later examples the roll chart comes out from the box without taking the entire tester apart. One whole screw later, you can fix up a loose roll chart, or change over to an updated supplementary roll. If you want to see my entire Jackson tube tester collection, CLICK HERE.

Thoughts on the ‘Dynamic’ Testing principle.

Is the Jackson ‘Dynamic’ testing method any better than a basic emission tester? I have arranged these thoughts for your consideration. Keep in mind that this is all speculative, ‘educated guesswork’, and it is up to you to decide if your Jackson tube tester is giving you accurate, reliable readings. After all, isn’t that why you own a tube tester in the first place?

From the Alan Douglas book ‘Tube Testers and Classic Electronic Test Gear’, a section entitled ‘Are Dynamic Models Better?’ is the first look most of us have had at this dilemma. However, the Robert B. Tomer book ‘Getting The Most Out Of Vacuum Tubes’ looked at this ‘problem’ some forty years earlier, albeit in a very veiled way. You absolutely must read between the lines to know Mr. Tomer is specifically referring to Jackson and Eico tube testers. The entire book ‘Getting The Most Out Of Vacuum Tubes’ is available as a PDF file on-line. It is well worth reading, and you can check it out by HERE. If you simply want to get straight to the ‘using a tube tester’ chapter, it begins on page 113.

All in all, you should compare readings from different tube testers, and decide for yourself if you can ‘trust’ any one tube tester. If you like the Jackson 648 (as I do), use it. It has a very good ‘Shorts’ test, and has a much appreciated ‘Life Test’. Yes, the test voltages are similar for a 6V6 as they are for a 6SL7. Yes, we are using a DC meter movement. You can still test your tubes for overall ‘quality’, determine how much ‘life’ you have left in that particular tube, and pick out tubes with leakage between various elements. What more do you need?