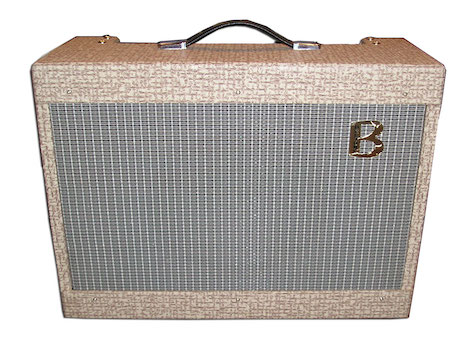 Here is yet one more Canadian amplifier that remains a mystery to me and many others. I can’t even swear that they are Canadian. There is a distinct possibility that they were assembled in Japan and imported to Canada. Check out the picture below of my own Beltone amplifier and then put on your detective caps.

Have you ever seen any other ‘Beltone’ amplifiers?

What leads me to believe these amplifiers have Japanese and Canadian ‘parents’? Consider the following;

I have only seen ‘up close and personal’ three Beltone amplifiers in my life, and I bought one of them. They were all the exact same ‘model’. They have an unusual tube compliment; 6AV6s for the voltage amplifiers and 6AR5s for the output tubes. There is also the strange arrangement of 4 input jacks! See the control panel photo below. These amplifiers don’t sound half bad; very low powered but even with the tiny 8″ speakers the amplifier sounds ‘full’. The tremolo does not have an ‘Intensity’ control, and the speed control has a rather small ‘range’. Yet I like the amplifier, and I do use it as a ‘bench’ amplifier when I revert back to doing guitar repair work. Perhaps someone out there knows a little something about these amplifiers.

“I am certain that most (if not all) Beltone amps were made in Japan by Teisco (Tokyo Electronic Instrument Supply COrporation). I own a Teisco chassis which has 2 x NEC (Nippon Electronics Corporation) EL84’s , 4 x 6AV6’s (also NEC), and a (non-original) 5Y3 rectifier. It has Volume, Bass, and Treble controls, 4 inputs, as well as a single ‘Tremolo’ control. I built a ‘Deluxe’ style box for it with Celestion G12-L35 and she sounds quite nice; a blend of Vox and tweedy Fender!

It seems the 6AV6 preamp tube is common in many early Teisco amps. I have seen Teisco amps labeled with names such as ‘Sears’ and ‘Northland’, amongst others.

Although Teisco made amps such as the ‘Check Mate’, it seems that the earlier ones, such as your Beltone and mine, are more desirable. I saw a ‘Northland’ amplifier (configured like my Teisco) fetch a figure like $300+ US on eBay a year or so ago. Apparently some wannabe Vox owners are buying these amps as a cheaper alternative!

From reader ‘Hugh R.W.’ I received the following email.

“Beltone was a Japanese import label. I think they were brought in by a company called E.F. Kay, located in Montreal. Beltone amplifiers were to be found in many of the smaller and cheaper music stores, especially the pawn shops on Craig Street. I remember the colour; it was a purple/mauve with silver thread of glitter in the fabric.

Beltone also brought in guitars and bases. They were the typical pushbutton models that Japan produced in the early days. Beltone was still one notch up from ‘Gemtone’, which were the absolute bottom of the heap, with necks that were virtually unplayable and a tremolo arm guaranteed to detune at every use.

The Beltone amplifiers were a bit better; however their BASS guitar was actually not too bad. It was the only bass available at a cheap price, and many of the better groups still used them until they could afford a Fender Precision (no one played anything else).”

Thanks, Glen and Hugh! I had a hunch I was on the right track, and your input lends a supporting vote. I have also lately seen the same amplifier as pictured above in a very bourgeois purple vinyl! These make great practice/recording amplifiers, as the 12-watt output limits it to only a very moderate gigging environment.

The photo below is a sample of the same amplifier, but now in a separate head and cabinet configuration! This was sent to me by reader Sander Larsen.

You may notice the four input jacks are now down-sized to two, otherwise everything else looks identical. I have also been sent pictures of the same amplifier in a red vinyl, but the available photos did not show enough detail for me to include here. Most readers were Canadian, so this leads me to believe that the Davis Importing Company or E.F. Kay were bringing these amplifiers into Canada as a cheap alternative to the more expensive American amplifiers.